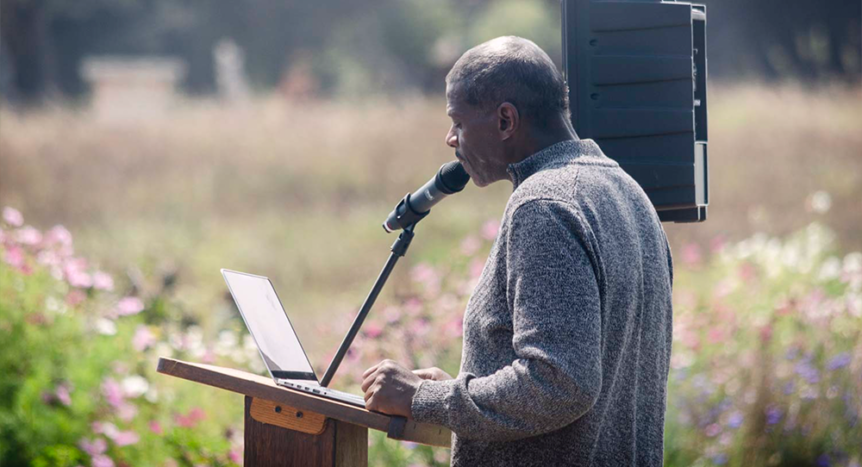 Good morning everyone and thank you for coming out and showing your support to the Homeless Garden Project.  I showed up here several months ago as a volunteer at the suggestion of my doctor. You see, I have been diagnosed with Congestive Heart Failure which has taken a back seat to my Aspergillus Fungus in my lungs. I’m told to go out and get more vitamin D and to take long walks and drink lots of water.

Well, I have never been the “long walks with the water jug in hand” type of guy. I have always been more the “short steps to the couch with a jug of beer and just take a vitamin D from the bottle next to the remote” type of guy.

After volunteering here for a week, I had already made the decision that I would be returning again next week. I was impressed–this place had made me feel something. The only things I felt prior to this was defeat and despair. I didn’t know it at the time, but there were about to be some serious life changes for me going on in and around this garden. That weekend, I made some inquiries about the garden. It was very popular and had a reputation for actually making a difference in the lives of those who chose to be part of it.

That next Tuesday, we sat in the circle to do check-in. After listening to the others speak from the heart about their affirmations and challenges, I felt like I was in a safe environment and felt free to express some issues I was holding in for lack of a worthy listener. So I voiced my issues and explained my situation to the group. It wasn’t long into the day, that I had several individuals from the group approach me with genuine concerns about some of the things I had shared. It felt good to have someone to talk to.

It felt even better to know that in no way was my situation unique or bizarre. These people had been through it. This group was definitely in the know. I decided to apply to the training and transitional employment program, and was accepted.

Jump several weeks ahead, I now have friends who actually wanna be friends based on personality and content of character and not on your assets or property owned. Because of that, the conversations I was engaging in were far more interesting.

I began to feel like there could be hope for me yet. I attribute this partly to the fact that the people here genuinely want change in their life and recognize that the Garden offers multiple solutions to assist someone attempting to better themselves and their current standing. Taking cues from those here ahead of me, I began to really open up because they weren’t just good listeners; I quickly discovered they also had solutions to offer in response to my concerns. Before long I realized something had changed or shifted. I was feeling whole again. I actually started writing poems again and producing new songs, on my computer, something I have not had any interest in for months.

Then one night while on the phone with my grandma in Chicago, she revealed somethingto me that I had totally overlooked. She pointed out that I had mentioned that I was eating healthier because at the Garden, every day, they whip the fresh vegies into lunch. So, I learned how to cook some of the food in a much simpler and healthy way. I learned about plating my food for portion control. She asked what my plans were for the weekend were and I informed her that I was going to go see a movie and grab pizza afterwards with a few friends from the Garden. She says, “So you’re eating healthier and going out with new friends.”  You see the point she was trying to make was that it seemed to her that I had not only found gainful employment but life lessons, and even ways to cook fresh picked vegetables.

After the call, she had me thinking, “Wow, I have found a place where I can go, where the atmosphere is always interesting, the people there have beautiful souls, there is a wealth of useful information, as well as training classes to help in transition to employment and housing.

What stood out to me the most through everything else was the fact that this magical Garden had transformed me from a sad, old, sick man wallowing in sorrow and self-pity—back to the vibrant guy full of ideas, jokes, and solutions. I was no longer depressed. My doctor even commented on lowering the milligrams of my psych meds.

I found that I couldn’t wait to get to work every day, and dreaded going home alone in the evening. I’m a work in progress but that too is getting better. Not long ago, literally just days ago, I would have scoffed and waved off anyone who would have approached me to tell me that this is what the Homeless Garden Project was capable of.

So, when we all heard that we’re now growing and moving to the Pogonip, we all got very excited. It will be a great opportunity for our crew to pass on their goodwill to future crews as the Project recreates the magic of our farm at Pogonip.  This magic was created years ago and continues to this day– not just existing, but as this move represents–thriving and seeking to serve this community on a larger scale.

It’s an even greater opportunity for the public, the community, to get involved and see just how things work. For me on this day and most other days, lately I will thank GOD I am once again inspired and self-motivated, even eager, to engage in this organization and the well-being of those in my community.

If I had my way, it would be a requirement that to become a citizen of Santa Cruz County you must first complete the 1-year program at the HOMELESS GARDEN PROJECT… My name is Mykee and thank you letting me speak.

–Mykee Hayes grew up in the inner city of Chicago and came to California in 1985 at the persistent request of his mom, who feared for his safety. Mykee turned several hobbies into respectable businesses including an art gallery, Waves of Glass in Laguna Beach; Mirror, Mirror, a boat and car detailing business in Newport Beach; and This Side Up, a newspaper in Sacramento. As a mortgage consultant, Mykee was recognized as “Loan Officer of the Month” for assisting the most African American families to become first time homebuyers.

After a few unfortunate mishaps, we’re glad that Mykee found his way to HGP. Mykee spoke at “Growing HGP,” a community event to present our programs, and plans for our new permanent site, where we’ll begin work soon. When he spoke, Mykee had just achieved his two-month milestone in our program