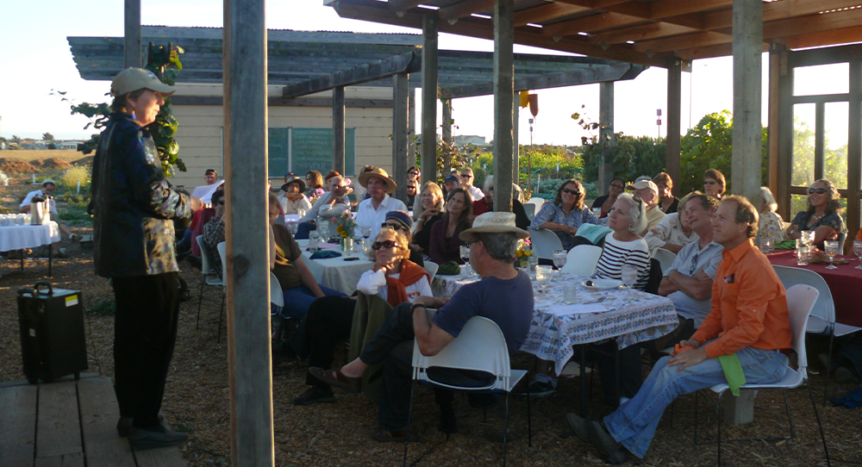 “As an oral historian, I cultivate stories. I believe recording and passing down stories sustains us. I believe in stories we can find the seeds of a sustainable future, if we listen deeply. Tonight I want to give you a packet containing nine seeds of wisdom I found hidden in the life stories of organic and sustainable farmers, activists, teachers, and researchers interviewed for Cultivating a Movement. The complete archive is online at: http://library.ucsc.edu/reg-hist/cultiv/home and in the edited paperback collection of excerpts from the program at http://www.amazon.com/Cultivating-Movement-Sustainable-Agriculture-Californias/dp/097233436X

Seed One:  Believe you can create something new, even if you encounter a bunch of naysayers.

In 1980 at the age of 28, Dale Coke was working for a diesel fuel injection company. Then he got cancer and wanted to change his life. He originally came from a farming family so and his wife bought ten acres of land in Watsonville  and decided to grow organic strawberries.

Dale told us: “And the neighbor, who had been a conventional strawberry farmer, told me that you couldn’t grow strawberries organically. I was a non-believer, so I started by trying to grow some strawberries organically. I planted them in 1980. I didn’t know anything, so I made a lot of mistakes. I found that we could grow strawberries, and the best part about it was that the market accepted them. We sold our first berries in Santa Cruz at Community Foods. It was, “These are organic?” “Yes!” “They taste good.”

Dale went on to invent spring salad mix and sold it to Chez Panisse. He originally rinsed his greens in an old washing machine cleverly set up to run only on the spin cycle. Coke Farms grew as salad mix caught on and began to be distributed beyond upscale restaurants and into supermarkets across the country.

Seed Two: Learn from old-timers who farmed before chemical agriculture (mostly before WWII)

Betty Van Dyke: Van Dyke Farms in Gilroy, CA learned how to grow organic apricots from her Croatian father who always said, “Don’t spray anything in the orchard that you can’t go in afterwards and pick the fruit off the tree and eat it.”

Born in Pacific Grove, the descendent of pioneers who came to California with the De Anza party in 1774, Russel Wolter started farming “organically” when he was fourteen and his mother forbade him to use chemical fertilizers and sprays on their ranch in the Carmel Valley. That was in 1947, decades before organic certification, but Wolter’s expertise in organic farming became a resource to a newer generation of organic farmers in the 1970s. After his mother’s death, Russel and his wife, Karen, farmed forty-five acres of the family ranch as Down to Earth Farm, which became part of the original organic certification program initiated by Rodale Press’s Organic Farming and Gardening Magazine in 1971.

Seed Three: Do what you love.

María Luz Reyes and her husband, Florentino Collazo, run La Milpa Organic Farm on land they lease from the Agriculture & Land Based Training Association near Salinas.

Collazo told us, “I love to work the land. I don’t like using gloves, because it’s like taking a shower with an umbrella. I want to feel the earth. When I pull the weeds, I want to feel my fingers penetrating the soil, feel that I’m pulling them up, that I’m doing it myself. I really love to look around, walk up and down observing, surveying it all and saying, ‘Wow.’ That’s what fulfills me. When I’m at the farmers’ market, and they tell you, ‘These are the best strawberries I’ve ever tasted, I’m going to take them’ ah, it makes you feel a light in your soul.” Reyes added, “Like yesterday, when they had that festival and all of these people came out to buy, a man said to me, ‘I’ve never touched the sky, but with these strawberries I just did.”

In the village of Pescadero, Dee Harley runs San Mateo County’s only active dairy. Dee told us: “Now people are wanting to come to places like our farm, where they can have a connection with the earth. They can understand that “that goat made that cheese I am eating right now because they can see the goat out of the window.”

Seed Five–Keep your hands in the dirt.

Mark Lipson is Organic and Sustainable Policy Advisor for the USDA now but he was CCOF’s first paid staff member, working there from 1985 to 1992, steering the organization through the establishment of a statewide office as well as several key historical events that awakened the public’s interest in organic food. The Organic Center calls Lipson “the primary midwife” of the California Organic Foods Act of 1990, sponsored by then-State Assemblymember Sam Farr, another hero of the organic movement. But Mark is also a longtime farmer at Molino Creek Farms, which pioneered the flavorful dry-farmed tomatoes we enjoy at this time of year.

Mark told us: “I’ve been extremely fortunate to have had real farming experience. I worked the dirt on our farm for years. Observing the behavior of our farming system is what has informed my ability to articulate issues in the policy arena.”

Seed Six: Value human beings and relationships. That is how you cultivate a movement.

“Organic is about investing in the health of people and the community and the soil and the future. When you look at it really holistically—which an organic system is a lot more prone to than an industrial system—you realize that it doesn’t make sense to have people who have tremendous potential to offer their community be on the fringes and not be able to participate. One of our trainees, Bill, did an interview for the newsletter with Homer the Homeless Hoe Man that was humorous and sarcastic. He was talking about how Homer, who is that little scraggly guy that’s our logo, that he doesn’t understand why it takes a homeless man to teach our children about the value of sustainable agriculture, and yet he’s very proud to do that.”

Gail told us about Life Lab’s Food What? Program that works with at risk Youth: “There was this one boy. It was the first day and they were making spanakopita. So they went out and picked spinach. We’re talking like, the whole meal was pretty much from the Farm. It was incredible. Grated carrots. It was so good. They brought me some. There was this boy, and he was all tough. That’s one of the things we talk about too, these kids, perception of them is not good, and their own perceptions of themselves are not very good. But anyway, he’s standing there and he’s being all tough, and he’s washing dishes at the sink. And this other guy is standing there, and one of them leans over, and he goes, “Man, what’d you think of that meal? And the other one’s washing dishes. He goes, “Well, that was the best f-ing meal I’ve ever had in my life. “Yeah, me, too.” So that’s the power of food.

Seed Eight: Build Community and have fun doing it. Sit down together like we are tonight.

Beth Benjamin was one of the first apprentices to Alan Chadwick at the Chadwick Garden at UCSC back in the late 1960s, later co-founder of Camp Joy Gardens and an integral employee of Renee Shepherd’s garden seed company.

Beth said: “You don’t want people to have to go marching back to the farm like in China, the Cultural Revolution. You want people to go, “This is cool, growing my own food. I can invite my neighbors over and we can eat it together. ”That is what life should be about: Less money. Less work hours. More time with your friends and family.”

And finally, Seed Nine: Dream big visions for the future of the world.

In 1983 Jim Cochran founded Swanton Berry Farm in Davenport, the first certified organic farm in the United States to sign a labor contract with the United Farm Workers. Cochran became the first large-scale commercial organic strawberry farmer in California. In 2002, the U.S. Environmental Protection Agency awarded him the Stratospheric Ozone Protection Award for developing organic methods of growing strawberries that did not rely on the soil fumigant methyl bromide.

When we asked Jim about his visions for the future he said: “There are thousands and thousands and thousands of people my age who’ve spent the last twenty, thirty, forty years dealing with small changes, working very hard to figure out how to get a refrigeration system to work in a co-op grocery store. There are a lot of us who are realizing that if we really want to make any real progress, we need to step away from our day-to-day small projects in our community and say, “Okay, we need to make some serious changes here if we’re going to survive as a culture or as a species. And that’s going to require more than just my individual efforts on this particular community food program, or this particular publication that I work for, or this particular farm that I work for.”

Well, we could do that too. We’re just as smart as they are, and we could compete the daylights out of Wal-Mart. Let’s open 2,000 new stores. Let’s open 100,000 new acres of farmland to small farms. Let’s build forty-two processing plants. Let’s buy 7,000 trucks. Let’s own a biodiesel or three biodiesel companies. Let’s own an insurance company. Let’s have a bank. Let’s make a $25 billion project divided into tens of thousands of little units. And let’s change the whole school system. Let’s change the securities law, tax laws. Let’s change a whole bunch of stuff!”

Let’s cultivate a better world together. Thank you.