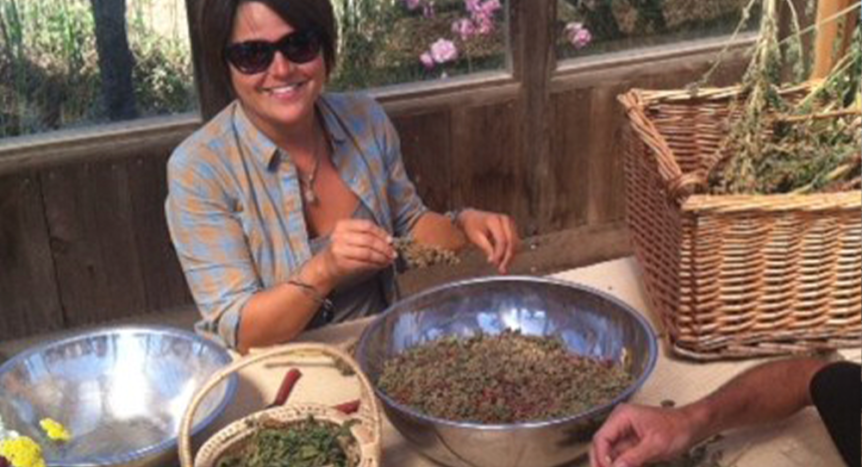 Here is the story that Joan shared with Michael Pollan after he toured the farm. She was very brave to write it and speak it, and that courage was palpable when she shared. Later, Raphael, an accomplished  SJSU film student, made a video chronicling the transition of trainees from farm to workshop with Joan’s story narrating. Watch the Video: Nourishing Soil

About a week ago, Darrie asked me if I’d be willing to give a 5 minute speech “sharing my story”. I agreed to, and over the next few days, I started writing my story down which I found, in itself, to be very therapeutic, but it made me realize how much there was that I wanted to say. It was really difficult for me to condense it into 5 minutes, but here goes.

When I was 19, I started using hard drugs. Prior to that, I had done quite well in my academic and social life, but in September of 2002, that changed. My mom passed-away when I was 25, leaving me with a hefty inheritance, a lot of which I smoked or snorted, but I managed to make a few small investments one of which was a small R.V. I lived in it from the time my childhood home sold in 2010 until I arrived in Santa Cruz last year.

Sometime in the middle of all of that, I found myself in Texas getting arrested for possession of controlled substances and facing prison time and felony charges. Shortly after that incident, I did manage to become sober. To this day, I still can’t put into words the miracle that was taking place when that occurred. I still strongly attribute it to a spiritual presence of my mother, but who’s to really say.

So I ended up in Santa Cruz out on bail with no clue on when I would be called back to Texas to face the courts and serve my time. I had $40 in my pocket, no job, and two of the best friends a person could ask for, Mike and Mary. Mary and I have been friends for years, growing up together in Washington. In fact, it was her and Mike’s pregnancy with Agaricus that brought me to Santa Cruz in the first place. I really wanted to be here for Agi’s birth, and at the time, I was unsure if that would happen, but I just kept moving forward as if my life in Santa Cruz would be something permanent. I was living with Mike and Mary coming into work with them everyday until I finally got hired on in September of last year. Since then, I can say, my life only keeps getting better and better.

There are so many ways that the Homeless Garden Project has nourished and nurtured me at a time when I was truly lost and vacant. I didn’t come from a broken home. I came from a home full of love and support, and for me to have chosen the path I did, caused the people who loved me a lot of suffering, and that, in turn, caused me to harbor quite a bit of guilt, shame, and grief. Those feelings nested inside of me creating symptoms of despair that couldn’t be alleviated by talking to a counselor or psychiatrist.

Shortly after I started working here, one of my co-workers said to me that working with the earth is one of the most effective means in which a person can heal themselves from deep emotional scars (such as guilt, shame, and grief). There’s an energy exchange that takes place when a person has their hands in the dirt giving back to the earth and is truly connected to the planet that is immeasurable in value, and it’s just one of the many avenues of healing that this project has offered me.

In the fall of last year, two social workers from San Jose State came to the farm to work with the trainees. The woman whom I worked with, Marna, went above and beyond her job description to spearhead a letter writing campaign to the courts in Texas on my behalf testifying to my character and the positive nature of the community I was becoming a part of. We gathered over a dozen letters which led to the ability for me to transfer my probation, with no felony charges or jail time, to California so that I could continue on my upward trajectory in an environment with a plethora of resources.

For instance: In addition to having the access to quality organic food, in November of last year, the project’s trainees were offered a scholarship to attend 6 weeks of nutrition classes from interns at Bauman College along with private sessions with a personal nutritionist. This helped me to gain a new perspective on the food I was eating and helped me to become more aware of how it was affecting me. Just recently on the farm, we were introduced to a book called “The Body Ecology Diet”, which again, is helping me to refine my awareness and strengthen my relationship with the food I eat.

During the holiday season, the trainees migrate to the store down town to make wreaths and other value added products. Last year, when we did this, I discovered that I had a hidden talent I didn’t know existed. The whole process of creative artistic expression had a feeling of importance and seeing my creations become a valued commodity gave me a much needed boost to my self esteem.

But above all of this, I believe that the most valuable thing I have gained from this project is the since of community it offers. It’s almost tribal-like in nature. For a lot of us, this is the closest thing to family we have, at least in this general area, and we truly care about one another.  We share stories about our weekends on Tuesday mornings at circle meeting.

If my car dies, and I’m stranded or if I need a place to just BE while I’m sick and healing, I can call one of my co-workers and chances are, if they have the means, they will be more than happy to help. We even had Thanksgiving dinner on the farm last year. I think feeling that type of biological security has helped calm me and allowed an inner beauty with-in me shine, and I’ve seen the same thing happen in some of my co-workers. It allows us to develop into the creative, radiant individuals we were born to be.

Albert Einstein once said, “The development of the individual personality is unthinkable without the nourishing soil of the community…”

The Homeless Garden Project community, is indeed, a nourishing soil.