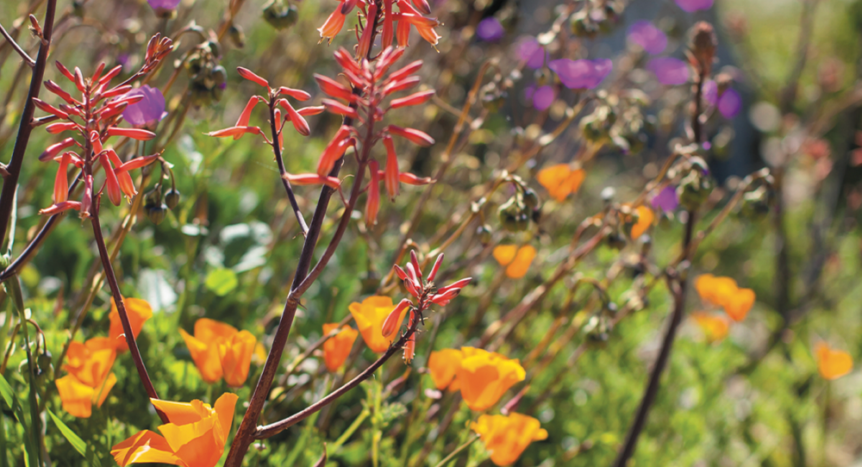 A recently built toolshed, thousands of seedlings, new trainees—signs of a new season abound at the Homeless Garden Project’s farm near Natural Bridges in Santa Cruz as executive director Darrie Ganzhorn leads a tour, pointing out the nuts and bolts of what makes this organic garden grow.

But it is the larger story of what this garden has nurtured over the past 25 years that I’ve come for: a grassroots organization that has helped hundreds of people who were homeless find their place in the world through learning to grow food; thousands of volunteers who have helped further the local organic movement; community members who have gathered here to enrich their own lives as they help make a better world.

On this particular day, Ganzhorn wrangles a busy schedule with Zen-like calm, fielding questions from visitors, volunteers and staff members while walking through the farm. When she lists the nonprofit project’s various programs—job training in organic farming and other skills and support services for the homeless, a CSA, a farm stand and U- pick operation, a year-round retail store in downtown Santa Cruz and numerous community events—it’s easy to grasp the organization’s strong local impact.

But the project’s reach extends around the globe, with people from as far away as Australia and Japan asking for information on how to start and manage similar programs in their communities.

It all began on a little plot of land on Santa Cruz’s West Side in 1990, with founder Paul Lee’s vision that a garden could help home- less people reconnect with the earth and themselves.

“Paul Lee really believed in gardens as a healing place, a place of sanctuary, a place where people could grow,” says Ganzhorn, who got in- volved not long after the HGP was started, and took over as executive di- rector at the end of 2007. Lee still serves on the board of directors.

The following year, the project was selling organic produce to restaurants and farmers’ markets; its CSA launched in 1992, the first in Santa Cruz County.

Giving homeless people the chance to change their lives has always been the ultimate purpose of all the organization’s activities. Ganzhorn says program participants learn a range of real-world skills and are paid minimum wage for 20 hours a week; they’ve gone on to work for others, start their own businesses or return to school. Of last year’s graduating class, she notes, 92% have achieved stable income and housing.

This year, 17 trainees are on board, each also receiving intensive counseling and social work assistance, and Ganzhorn’s hope is to triple the number of participants within the next decade.

For trainee Fermin Lopez, who has been working in the farm kitchen since January, the Homeless Garden Project has been a god- send. “It’s an ideal place to be,” says the soft-spoken 26-year-old, who couch surfs with friends while he waits for available Section 8 housing. “Everyone contributes as one.”

Also remarkable is the project’s ability to bring together people who would otherwise never know one another. Some 2,200 volunteers helped out last year, putting in nearly 20,000 hours, with everyone from Girl Scouts to Google employees pitching in.

This has enabled the project to get by with a minimal staff of just eight paid positions, several of them part-time. “It’s a huge amount (of volunteers) for a small nonprofit like ours,” says Ganzhorn.

The project itself is now in search of a home where all its programs can be housed. Discussions with the City of Santa Cruz are underway to hammer out details of moving to the iconic Pogonip property, once home to polo grounds and golf links, and owned by the city as green- belt property since 1988.

“It would mean so much to have a permanent site,” says Ganzhorn, who notes that final approval from the city council may come as soon as this fall.

HGP’s goals for the future include “a world-class farm at Pogo- nip,” says Ganzhorn, and continuing to build the farm and enterprises. Also envisioned are partnerships with local businesses and a strong alumni program to add to the effectiveness of its training and transi- tional employment program.

In the meantime, the Homeless Garden Project will celebrate its quarter-century birthday with a series of benefit events later this year, starting with an Aug. 22 gala farm supper featuring renowned chef and cookbook author, Deborah Madison, and another on Sept. 19. A 50- mile cycling event, the Swanton Loop Challenge, is set for Oct. 24.

Such fundraisers are vital to keeping the project going, since these events account for more than 10% of this year’s funding, Ganzhorn says. Donations, in fact, make up more than half of HGP’s income, with 40% percent coming from project enterprises. (See “Get Your Farm Fix On,” p. 52, for ways to support it.)

“Even more important, we think it’s almost impossible to come to a farm dinner and not walk away in awe of the power of food and the farm to connect people,” says Ganzhorn. “Our dinner guests do much more than support our programs with the price of their ticket—they walk away with an experience of the power of our mis- sion, and we hope, a commitment to helping us achieve it.”

Kathryn McKenzie writes about sustainable living, home design and horticul- ture for numerous publications and websites and, when not at the computer, attempts to grow tomatoes at her home in foggy northern Monterey County.

Nurturing lives: Homeless Garden Project executive director Darrie Ganzhorn (top) says that the daily lunches made from the farm’s pro- duce each day and shared together by trainees, volunteers and staff (center) are community-building experiences.

You can find the original article here.Download