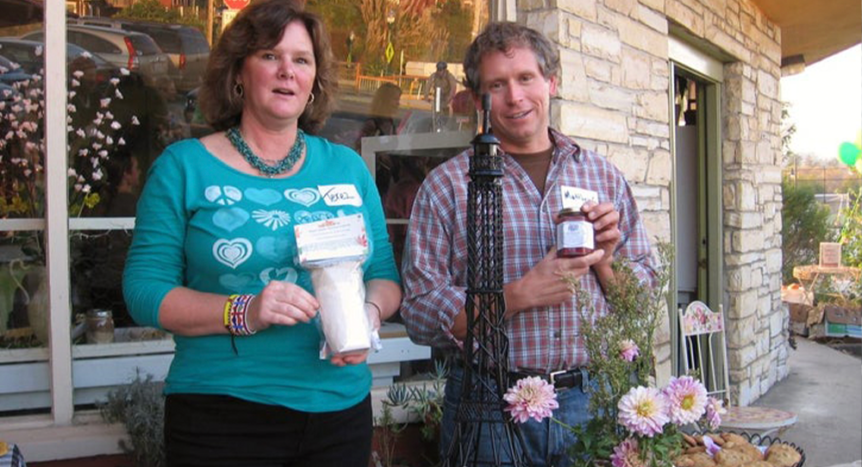 At the new traffic circle close to the wharf, retail store opened its doors Friday for the first “Sweets and Treats” party.

Over 120 people got a jump on their holiday shopping as they sampled locally-donated wines and project-made organic treats, like lavender-infused brownies and shortbread. The mixes are sold in reusable Mason jars.

Trainees learn about sustainable agriculture and organic farming at HGP’s three-acre Natural Bridges Farm. Then they attend workshops to learn how to transform some of their raw produce into art.

“They make organic products like the seashell wreaths, which represent where we live since our business is so close to the ocean. We select six different herbs, all from the farm, and the shells are indigenous as well,” said Tamara Cucchiara-Sitka, manager of the retail store and the Women’s Organic Flower Enterprise (WOFE).

Sometimes locals will stop by the store and give them seashells to use in their creations. “All the money goes back to the farm so HGP can double or triple how many people they can get off the street and into the farm,” she added.

Matthew Skaarup, the garden’s development coordinator, said working here can be a big step on an important path to independence.

“For folks who are homeless and unemployed, putting them back to work in a situation where other people are counting on them and where their production is valued is really important. It’s a great opportunity for people to create something new for themselves, be a part of a new community and start reaching for something bigger.”

Cucchiara-Sitka said that the trainees eat free and are paid for eight hours of work per day. “All of them are now living in a shelter, except one man and we’re working with him.”

In 1991 The Homeless Project Garden opened as the first organic community-supported agriculture in the county, selling produce from the farm from May-October to subscribers.

“It’s a great opportunity for folks to invest in the farm and get their products locally,” said Skaarup.”You can get a boxful of vegetables every week for 26 weeks. You can also come to the farm and work side by side with trainees as a volunteer.”

The Holiday Store opens November 21st next to O’Neill’s on Pacific Avenue downtown and will close on Christmas Eve. Products include artisan candles, whose raw product comes from local beekeepers, and is transformed into hand-made gifts by a staff member who used to be a trainee.

“We’ll be introducing our succulents. We have been working with a couple of master gardeners who are using reused and recycled pots,” said Cucchiara-Sitka. “People from all over, even Monterey and Santa Clara counties, make it a tradition to buy our wreaths.”

Volunteers are needed as gift wrappers, ambassadors to welcome and educate shoppers about HGP’s mission, and as shift managers. Contact Kelly Mercer, volunteer coordinator, at the retail store.

“We are looking for local artists who would like to sell their art in our Holiday Store,” said Cucchiara-Sitka. “We are looking for art forms that represent gardens, farms, food, community, re-purposed, recycled, reused, unique cards and jewelry, flowers, paintings and photos of our farm and Santa Cruz County.

What special events are happening next year?

“We are in the developmental stages of planning a dinner and
movies series for the winter starting in January. We would focus on the theme of sustainability and partner with local restaurants,” said Skaarup.

“This summer we started a sustained dinner series out at the farm to educate people on what’s happening at the Project. They were really successful,” he said. “We partnered with local chefs who donated their time. We had head chefs from Gabriella’s and Conscious Creations Cafe in Santa Cruz and Oak Tree Ristorante in Felton, featuring all locally-sourced ingredients.”

According to Skaarup the series of three will continue next summer. “We have a unique setting out there, a three acre organic farm, and it’s a beautiful spot on the Westside, really close to the ocean at sunset.”

Cucchiara-Sitka admitted that sometimes she has gone to work
concerned that she had not been able to sleep well the night before, and then realized that one of the trainees “was concerned the night before because it was raining and how uncomfortable the cardboard box was. Fortunately, Santa Cruz has a big heart for the homeless.”