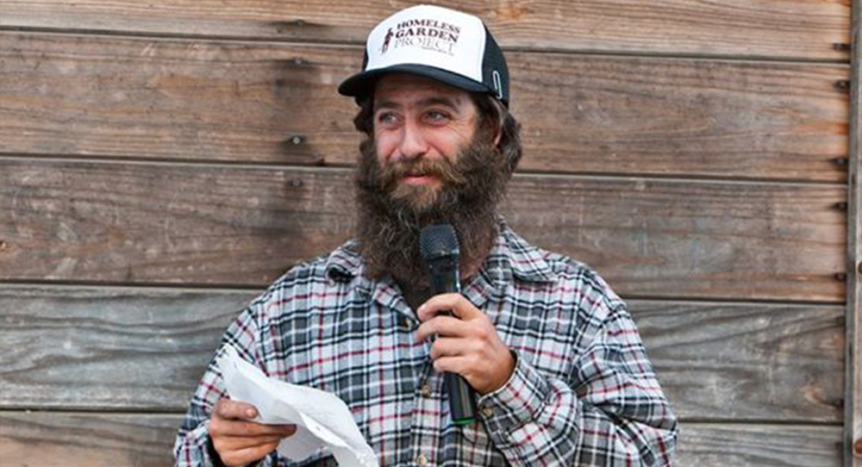 Andrew presented this talk to 75 guests at our SUSTAIN Farm Dinner. My name is Andrew. I came to Santa Cruz when I was 13,  and 14 was my first trip to Juvenile Hall. By 15, I was in rehab and by 16, I was in a group home until I was 18. I had a family that loved me and wanted me to succeed. I left for Colorado at 19, found my dad at 20 after 18 years of separation and came back to Santa Cruz at 22. By 25, it was all about drugs and alcohol. By 30, I had lost everything over and over again.

Homeless, I found sanctuary in the woods for years. Illegally camped.

I met Stacy almost five years ago. We had the same visions and dreams. It was easy to fall in love with her. I admired the love and friendships she had created with her two sons and still do. We were together. Shortly after we became a couple, the house she was renting went into foreclosure. The boys–her sons–ended up homeless for nearly two years. Shortly after “Occupy Santa Cruz,” we found out Stacy was pregnant. It became the motivation we needed to turn our lives around.

That Christmas, my mom brought us home and by New Year’s we were both clean and sober. A healthy baby girl was born August 1, 2012. Meredith Ann Marie Albright.

We live in a tiny one-bedroom apartment in the flats. We have Section 8, Food Stamps and a small amount of money through CalWorks. During this time, I had no idea how I was going to find a job, let alone support my family—family that I’ve always dreamed of having. All attempts at employment were unsuccessful.

April 20, 2013, I fought off a robber and was stabbed twice in the process. I was air-lifted to Stanford Hospital. Months of pain, anxiety and depression followed. I slept for months. I needed help and I knew it.  A social worker at CalWorks sent me to see a therapist. His name is Jim Sutherland. While getting to know me, he told me he was a former volunteer of the Homeless Garden Project. “You should go check it out. Ask for Darrie, tell her I sent you.” And I did. I started volunteering and was told about the training program. I filled out an application, turned it in, got an interview and was hired.

That alone meant the world to me.

So that’s how I got to this magical wonderful place. I’ve been very successful here. Through the help of the Project, I was able to get another job at the Garden Company. Being here is helping each other help ourselves. I had an opportunity to heal and grow. I’ve sown thousands of seeds here and left a mark. Most of the food we’re eating tonight came from seeds I sowed. I have the ability now to leave so someone else can do what they need to do here. It was the time I needed to fill in the blanks. I love this place. Thanks for sharing it with me.

Basically what I want everyone to know is that for those of us who are stuck and having trouble navigating our lives, this place has a way of getting us started that really works.

You know how magical Christmas can be to a small child. That’s how I feel about this place—like I’m getting ready to open a bunch of presents.

– Andrew Albright is a trainee in the Homeless Garden Project’s transitional jobs and training program. He says, “In the past I was the destroyer of my life. Now I’m a student of my life, love, humanity and healing.”