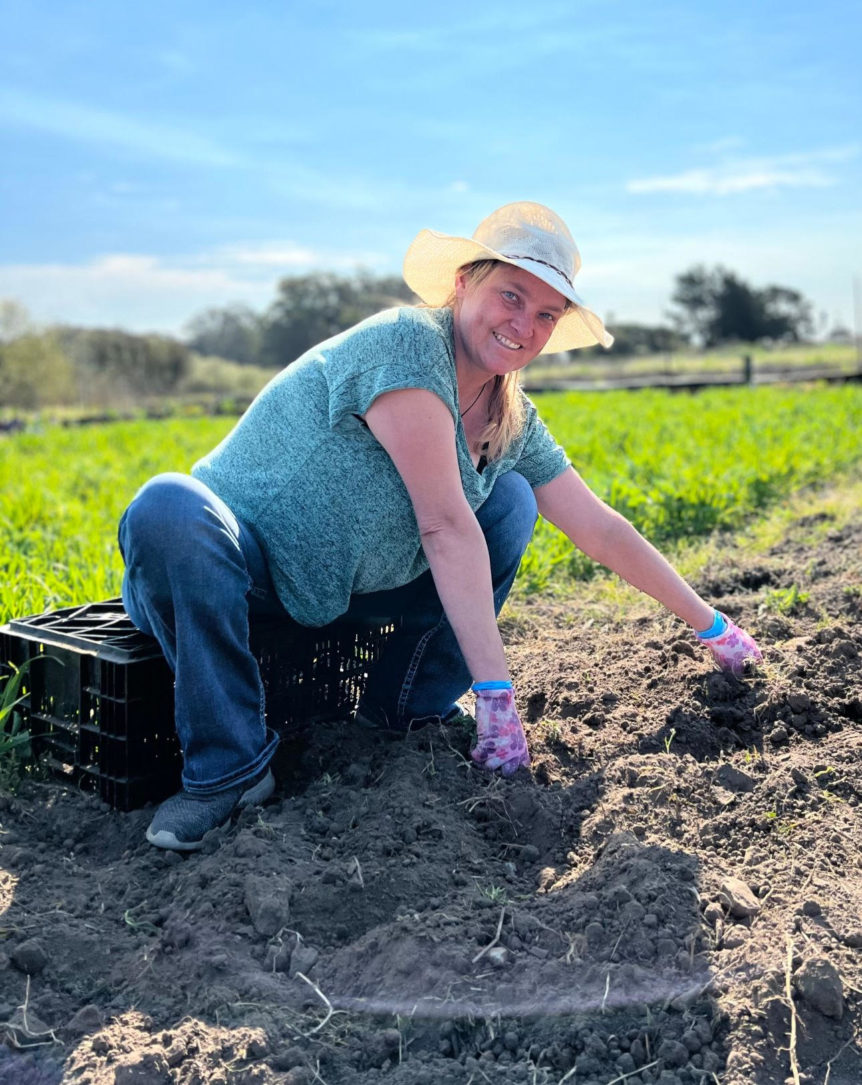 Hello and thank you for being here; my name is Hydie, and I am grateful to get the chance to explain how the Homeless Garden Project came into my life, as well as tell you how homelessness has affected my entire life. And what I had to do to get affordable permanent housing.

My family’s stories are not very different from many other people’s stories on the streets. My mother suffers from schizophrenia and was addicted to drugs for many years. Our dads were addicts and in and out of prison. My sister and I got separated after our mom abandoned us. She was homeless most of my childhood here in Santa Cruz. She finally accepted help through the Coral St. shelter, got clean and sober and eventually permanent Section 8 housing due to her mental health, along with her best friend who I call my aunt to this day. That was over 20 years ago and they are both still housed and doing well.

My sister’s journey was a lot rougher than mine. She also became addicted, walked away from her oldest child and was homeless for many years.  She found herself pregnant again, still addicted but this time couldn’t face the guilt of losing another child. So she did everything CPS asked her to do, got sober, they stayed at the Rebele House at first and eventually received a Section 8 voucher through CPS when she got her son back. She has since graduated with high honors and two degrees from Cabrillo College.  Most people don’t realize that getting a Section 8 voucher is almost impossible at times. And in counties like Santa Cruz, it’s like winning the lottery.

Once you have the voucher, it’s even harder to find a house or landlord that’ll accept a Section 8 voucher because of the stigma behind it. If more people knew how hard it was to get a voucher and keep it, more property owners would use and benefit from the program. There are very tough rules a recipient has to follow in order to keep their voucher and a few the landlord has to follow as well, like keeping the property safe, clean, and up to code.

My homeless journey was very different.  I married my high school sweetheart, we bought a house when we were 27 and lived a pretty good life. He worked and got a degree while I stayed home with our two boys, mostly. Until my happily-ever-after came crashing down around me in 2015. All of a sudden I was what they call a “displaced homemaker,” with little to fall back on other than as an in-home caregiver or fast food. Eventually, we ended up in Colorado and I quickly found myself living in my truck with my son.

I searched and went to every agency I could find to help. We found a small family winter shelter.  I jumped through every flaming hoop put in front of me, I never stopped advocating for us, because no one else would. When people see you working hard to improve your situation, they tend to work hard to help you.

My housing worker recognized my efforts and I received one of only three applications she had to give out for a one-year housing program. The panel that reviewed my application said it was the best one they had ever seen and I got in. I did everything the program asked, put my name on every list I could. The local Housing Authorities only give a two-day window per county to get your application and paperwork in when they open the Section 8 list for a lottery style system. (This is in contrast to Santa Cruz, where, because the need is so great, there is a 10+ year waitlist that rarely opens. It’s extremely difficult to get added to it, like Santa Cruz has because the need is so great). By the grace of God, my name came up when they drew names, and I received a voucher. It took about 3 years all together–which is unheard of in most counties in California.

Last year I decided to move back home to be closer to family because of the rapid progression of a genetic lung condition I have. My pulmonologist in Colorado was even talking about starting the lung transplant process. I could barely walk across the street without being extremely winded, needing to use oxygen or an inhaler. I could no longer perform most of my duties as a caregiver for people with dementia, which I loved and took a great deal of pride in.

We arrived in Santa Cruz in August so my son could start his freshman year of high school. I was home less than 24 hours when I was hospitalized for 2 weeks with pneumonia. Our apartment was still under construction, and moving in was going to be delayed for months. So I found myself homeless once again. Fortunately, the hospital helped me get a room in the Recuperative Care Center at Housing Matters and my son stayed with family.

We were starting over once again and I was struggling to find a job that I could do considering my physical limitations and housing situation. Then one day my aunt suggested the Homeless Garden Project. She happened to go through the program when she was homeless 20+ years ago shortly after the program began. Darrie was already a part of the magic here back then and my aunt sang her and the Project’s praises. She explained how it helped her move towards stability and gave her a sense of normalcy after being homeless for years. It took my aunt a while to move up to making wreaths (she knows I’m crafty and would love that part of the job). She explained that HGP would meet me exactly where I was in life.

I knew I would be great at the arts and craft part of the job but the Farm… I could barely walk to my car without struggling. How was I going to work on a farm? Never once did the staff make me feel like I couldn’t do it. They made sure I understood that even if I couldn’t pull weeds or broadfork a bed for planting (I had no clue what a broadfork even was), I could do something productive and essential to the progression of the farm and the products we create from its bounty.

After being here for almost 6 months, I truly understand it was never about what I have to give to the Project, but what the Garden has to give to me. A place of healing, a community and unbelievable support.

I think that is just a small piece of the magic that happens here. By connecting with the people who need a chance, meeting those people right where they are in life. It doesn’t matter if you haven’t worked in years or once had a career and fell on hard times. No matter if you have spent years in prison or lost years to the prison of addiction. The Homeless Garden will welcome you and give you a chance. As long as you are simply willing to show up when you say you will, work, learn, and grow. You don’t have to hide the fact you’re sleeping in your car, in yesterday’s clothes or haven’t showered in a couple days, the way you would at any other job.

Take some time to think about that for a second, where else can someone facing homelessness find such understanding, compassion and potential for growth? Even I have driven past someone panhandling and thought, “There’s nothing wrong with you, get a job. Never once did I think about how impossible it was for a “normal looking” person on the streets to just go get a job.” I understood those people with a mental illness or addicted to drugs, I saw their struggles first hand. It wasn’t until I was homeless that I realized how impossible getting a job was in that situation.

The Homeless Garden Project bridges that huge gap for our community, they give people a hand up not just a hand out–as long as you are willing to put in the work to better your life, learn and grow as a person and a member of the community. We grow so many wonderful things together at HGP. We get to grow things like hope, self-worth, life and job skills, a sense of belonging and purpose. We also grow things like organic flowers, herbs, sustainable healthy food for the community, art, and the wonderful products we create to sell at our stores.

HGP helps people find a path forward out of the darkness of the streets, a path towards self-reliance, housing and gives people once forgotten by society the skills needed to hopefully get a decent job they will like going to, moving forward in life and so much more. With your support the magic of this place will continue to bless the lives of so many including myself, the people that came before me, people who felt lost, forgotten and unseen by so many before finding the Garden.

As well as the people like all of you here today, the people who support us in so many different ways. Like the wonderful volunteers, folks who donate their hard earned cash, the people who buy the one-of-a-kind products we create. Thank you so very much, your contributions to this project are invaluable, without all of you, the Homeless Garden wouldn’t be here for all of us.

In closing I want to share two quotes I find very powerful. The first is by Rabindranath Tagore. He says “Let us not pray to be sheltered from dangers but to be fearless in facing them.”

The second is by Sigmund Freud. He reminds us that “One day, in retrospect the years of struggle will strike you as the most beautiful.” Both hold a lot of meaning and strength when someone is struggling throughout life. We all struggle, but it’s how you get past it that makes a difference. Good or bad, the lessons you learned along the way shape who you are.

—Hydie Wyatt is an HGP Trainee. She wrote and shared this talk at the HGP’s Sustain Auction, April 23, 2022. In addition to having worked as a caretaker for people with dementia, Hydie is a writer and photographer, and her photos are available in our Downtown Store. Hydie is a mother, an outstanding team player and the recipient of a “Caretaker of the Year” award.