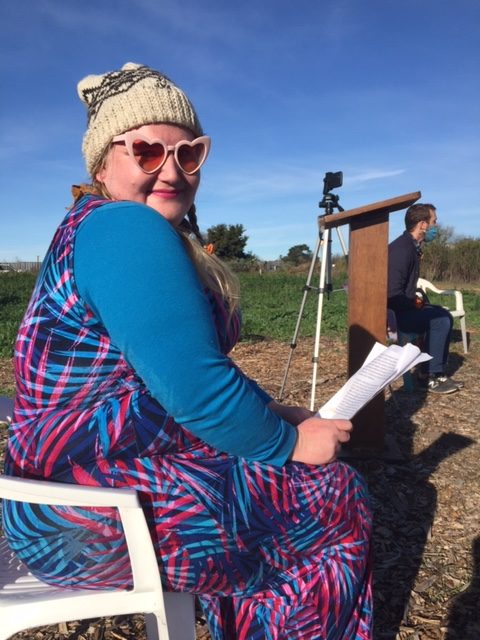 I am truly honored to be asked to speak today honoring Dr. Martin Luther King, Jr. His work and message of non-violence, unity, and love has deeply impacted many lives across the world. He worked to dismantle the systems of inequality that created conditions of poverty for so many communities worldwide. He believed that hunger and poverty were not individual experiences, rather they are community-wide symptoms of institutional barriers to employment, education, housing, and healthcare.

Dr. Martin Luther King Jr has always been a huge inspiration in my life. I have so many fond memories of listening to his records in my friend Angie’s basement as young women in a small Southern town in Virginia. I’ve known Angie since I was three years old. We grew up on the same street, five houses away. She has always been an incredibly intelligent woman and is still my best friend even though we live on opposite coasts now. She was the one who first introduced me to his records. His gift as a talented orator, effortlessly weaving poetry and philosophy into his preaching, and his powerful inspirational message of non-violence, unity, community, and love was captivating. Our favorite was his Mountaintop speech. Angie and I would dream up all the ways we wanted to change the world too.

I never dreamed that I would be homeless.

Some think addiction is a choice. Some think addiction is a disease. Either way, it destroyed my life, consuming my dreams, goals, hopes, aspirations, family, friends, sense of self and my connection to my higher power. It took me to dark and dangerous places, abusive relationships, and affected my will to live.  Trauma from domestic violence and my addiction led to a decade of chronic homelessness. I was constantly suicidal and frequently hospitalized in Garden Pavilion, the lockdown mental unit at the local hospital. I was so lost, so broken. I didn’t know how to be a human, I often said. I had known long years of hurt and neglect. I had come to feel that life was a long and desolate corridor with no exit signs.

I was introduced to the Homeless Garden Project by alumni. Three friends I had been homeless with, one by one, went through the Project and started radically changing their lives. They told me stories of bountiful harvests and mischievous gophers, planting dahlia tubers in the rain, building beds while building dreams, hard work and patience, camaraderie and love. Walking around town, they would identify plants and explain their uses. Stopping by the store, they would point out the wreaths they made with the flowers they grew.

Sometimes I would stop by for lunch and come volunteer in the afternoons. I got a peek into the magic that happens here. I knew that there was something magical, transformative, that happened in this program that supported my friends drastic and radical positive transformation from the life we shared on the streets, and I knew when I was ready to change my life it would help me do the same. Even then, I had no idea exactly how much I would grow and blossom with the project.

A little under a year and a half ago, my partner and I decided to get sober. We lived in my car, the only relic I was barely able to hang onto from my last stint of sobriety, with our cat, Rumi. Somewhere along the way, I must have learned that community was the key to building a life worth living sober. I started to look for community in my life. I also needed some structure without being overwhelmed. I wanted to start contributing to my community. I started volunteering at a program that helped me do my laundry, but that was only one day a week. I needed something more.

My friend Victoria told me that the Homeless Garden Project was doing a trial hire and there were two more spots available and orientation was at 2pm that afternoon. I didn’t even know if I was capable of working; for years I had various case workers telling me my best option was applying for Disability through Social Security. But I figured I could try. I had witnessed firsthand how it took my friends from the sidewalks to contributing members of society and I was ready to try to do the same.

I was barely 60 days sober my first day at HGP. I was so nervous and anxious. I hadn’t worked a “real job” in years and here the project was giving me a chance practically sight unseen. I hadn’t interacted with people in normal social situations in so long. I felt so incredibly awkward. I had let my addiction degrade me to feeling inhuman. I felt so far away from, so disassociated and disconnected. But the smiling faces of fellow trainees along with ‘cozy cottage’ vibes of the workshop, the smell of beeswax, dried flowers, and essential oils and a warm cup of homemade chai Lynne would bring from India Joze helped put me at ease.

Every morning, we would start the day with a three-minute meditation, followed by “circle” a place, a space for me and my fellow trainees to ‘check in’ and share our feelings, our struggles, our goals and our successes. Then we would stretch and start the tasks for the day, processing herbs, creating wreaths, and producing holiday gifts until lunch when cheerful volunteers would bring bountiful bowls of warm delicious organic foods featuring veggies and greens grown on the farm. It seemed like a dream. I’d often save leftovers to eat for dinner that night. In the afternoon, we would circle up again, talking about the tasks that day and how they were going, seeing if anyone needed support or another task before finishing the day’s work.

I was so overwhelmed with love and support. I had a safe space to grow and share and slowly, I began to do just that. The love and support of my fellow trainees and staff helped re-awaken my forgotten passion for crafting and gave me an outlet for my creativity. For the first time in a long time, I felt useful. I felt ‘part of.’ I found a community that was farmily. A farm-family that believed in me, and taught me to believe in myself. I fell in love with the Project. I felt fulfilled in ways I’d never experienced before. I didn’t feel like a cog in the corporate machine. I didn’t feel like a weed, no longer struggling to grow in gutters or city sidewalks being stomped and crushed daily. I’d been transplanted into the safety of the garden and there I began to grow.

Within a month, I found a place to live and was able to move out of my car into a room on the Westside with a big empty backyard for my cat to play in and explore. I started to learn SO many new skills. At the farm, I discovered a passion for gardening and started turning my empty backyard into a beautiful garden. There is something so beautiful and healing about working in the soil. Every day, I was so incredibly amazed by the plants and their ability to grow.

While transplanting, I told every single plant “I love you. Welcome to your forever home. You are going to grow and thrive here on this beautiful organic farm and be the best plant you can be.”

At the workshop, I learned how to write cover letters, and tailored working resumes. I got to practice interview skills. I discovered a talent for teaching and natural leadership. Lindsey noticed and told me that a crew lead position was opening and urged me to apply. I worked hard to earn the position and was eventually promoted to Value-Added Crew Lead. Crew lead is a yearlong program for trainees. There are additional responsibilities, longer hours, higher expectations to be a good example for trainees and added commitment to the program. I eagerly stepped up to the challenge.

I get to practice the skills learned during my time as a trainee and to learn new skills in leadership and conflict resolution. I get to teach others what I learned. I get to share the magic of the program and help people find hidden talents. I’m able to save space and give the support I was given. I get to be a light, a raft, an outstretched hand.

During my time as crew lead, I started a 12-step meeting for trainees who also need support in their recovery.  I celebrated a year sober. Two months ago, I was able to purchase a new car. I can’t imagine what my life would be like without the Homeless Garden Project. I certainly wouldn’t have been able to completely transform my life without the Project’s love and support. Like the love and support Dr. King gave the world.

In closing, I’d like to return to Dr. King.

In Dr. King’s last Sunday Sermon, he spoke about his Poor Peoples’ Campaign. King looked across America and saw people and families of all races, cultures, and communities who were hungry, homeless, unemployed and underpaid and began to organize a movement of people to dismantle systems of inequality that created conditions of poverty for so many communities. In this sermon he said, “And maybe we spend far too much of our national budget establishing military bases around the world rather than bases of genuine concern and understanding”

—Elise Strobel is a crew lead at the Homeless Garden Project. She wrote this talk and presented it at our farm on Friday, January 15 to our trainees. It was filmed for inclusion in our virtual event honoring Dr. Martin Luther King, Jr. on January 18, 2021.