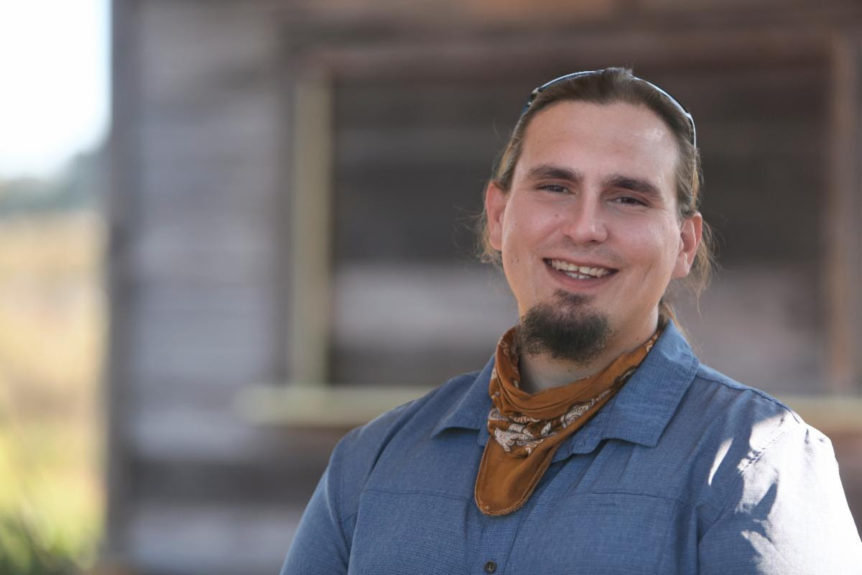 Hello my name is Cody Davis. I am 33 years old and I’m a native of California, being born in Monterey County in the mountains of Carmel Valley. I would like to share with you my experience with the Homeless Garden Project and the significant change in my life since becoming a trainee.

I would like to start by giving a little bit of background on myself. I was born in Carmel Valley, in the mountains of Tassajara to be exact. I was raised by two loving parents who taught me to love the Earth and work hard, and to strive to enjoy the work I do. I had a very humble upbringing, living off the grid with generator power, wearing hand-me-downs, and I was taught that money was not the most important thing in life.

I was located in the Carmel School system, where I took an hour-and-a-half bus ride every morning to Carmel High School. There was a daily culture collision of the “haves” and “have-nots” as I was going to school with kids that lived in the wealthy communities of Pebble Beach and Carmel by the Sea. A lot of the practices and principles that my parents taught me didn’t pay off in many of the social circles. I was often made fun of for being the poor smelly kid from the country.

Despite this, I’m very proud to have been raised the way I was. As life comes full circle and I gain perspective, I am able to see how the principles my parents taught me are fundamental to a fulfilling existence.

After leaving home at 18, I joined the workforce and started my life on my own. I quickly found that living without the protection of my family and out in the big world was overwhelming, and I quickly turned to a life of instant gratification and ultimately drug use. My drug addiction caused me to alienate myself from anyone who cared for or loved me and I was set on a path for destruction. Legal trouble quickly ensued and I found myself facing several years in prison. In lieu of going to prison, I chose to go to a year-long militant-based (military style?)  attack therapy recovery program called the Jericho Project in San Francisco. The program has a 1-year blackout period during which you can have no contact with the outside world.

One day, six months into the program, I came home and the staff at the program informed me that my father had passed away. He was taken to the hospital after being unresponsive in bed. The doctors told my mom that he had liver, stomach, esophagus and brain cancer, and he only lived 14 more days.

They told me when I came home from work that day and I was able to make one phone call to my mom.  After not talking to her for six months, it was overwhelming to say the least. My father was the pillar of our family and none of us could imagine living without him.  His kindness, knowledge and grace were unmatched. My mother told me she loved me and to stay where I was, and concentrate on what I was doing, so I did.

I had no way of knowing how my mother was doing after losing the love of her life and husband of 37 years. I graduated from the year-long Jericho Project and it reinforced the work ethic my father taught me. I felt as though I was ready to tackle the world again. I came home to a new world without my father, moving in with my mom.  She counted every second that my dad was gone and I could see her wasting away to nothing. Several months after I came home, my mother passed away of a heart attack.

In a matter of months, I had lost my mother and father and my whole world fell apart. My life spiraled out of control and I found myself alone and unsure how to find power to go on. Time seems like a blur now, but years went by in a haze.

During that time, I pushed everyone and anyone that loved me or was close to me far away, so I was left to grieve the loss of my parents with total strangers.  My drug abuse became unstopping and completely consumed every aspect of my being. Out of control. One of the strangest feelings ever, was the day I realized that I had nobody left to disappoint. There was nobody left to be disappointed in my actions and in the same right there was nobody left to applaud me if I made the right ones. It was an incredibly liberating and freeing feeling, cuz literally I could do whatever I wanted.  No one cared. I used to say that if I went missing, the only people that would be looking for me was probation.

My battle with addiction and legal troubles has seen me placed in incarceration for extended periods of time and I’ve lost years of my life in a box. I have been in many rehabilitation programs, both voluntarily and involuntarily, but I still benefited from them in many ways, with the cumulative aspect of recovery. Yet I still found myself unable to break the bonds of drug addiction. Constantly returning to the hamster wheel. Last year, I was released from jail and had finally paid my dues to society. I was a free man without any probation or any ties to any county. I came up here from Monterey to Santa Cruz.

I struggled with my addiction for some time but was finally able to achieve a small amount of sobriety time. But I knew that without some type of structure in my life, it was only a matter of time before I fell back into the same cycle. A good friend of mine, who was a trainee here at the Homeless Garden Project, recommended that I come in and try for the trial hire here at HGP. On November 18th, I became a trainee at the Homeless Garden Project and I was amazed, that sight unseen they hired me.

They were able to hire me even though they knew I lived in my car and I really didn’t have any clothes or wasn’t able to put myself together that well. But they accepted me for who I was, and most importantly, they gave me a paycheck. What I found here at the Homeless Garden Project was a tribe of people in similar circumstances as me who are trying to put their lives together.

I was able to be engaged in what the Project staff were teaching me in the workshop every day, and it helped keep me clean and sober. My partner–who is also an employee here at HGP–and I, were able to pool our funds and finally get ourselves a place to live! And after over five years of living in a car, we actually have a place to live and pay rent. The Homeless Garden Project has put so much interest into me with different classes on how to use computers, how to make a resume, and generally how to be an adult. The circle check-ins have made me feel a part of a community that was missing from my life for so long. I’m able to be transparent and share things that I’m going through on a constant basis. As I’m writing this, I have 364 days clean sober and tomorrow I’m celebrating one year of continuous sobriety. September 18th.

My mother and father taught me so much and were the best family that a man could ask for. Some people never had that. I had the best family for 25 years and it’s like they’re still with me. Their lessons are with me every day and now I’m in a better headspace where I can reflect on that, and live up to their memory.

Like I said this is just the beginning! And I’m so proud to be involved with an organization like the Homeless Garden Project. The way that they’re able to help us feel proud of the small steps and achievements that we are making is very beneficial, and if I just stay true to the course I am on, I know everything will work out.

Not too long after working here I mentioned to Darrie that I would do whatever I could to give back to HGP because I could already see how much this place was helping me. I meant it, so when she mentioned that I could have a chance to give a talk and share, I jumped on it. And I’m a bit nervous, but I really wanted to share these thoughts, and I’m really trying to live up to my mom and dad’s memories.

Steven Lavon Davis and Carol Jean Thunman Davis raised a good son, and I have a lot more to do in life, this is just the beginning. Peace and love.