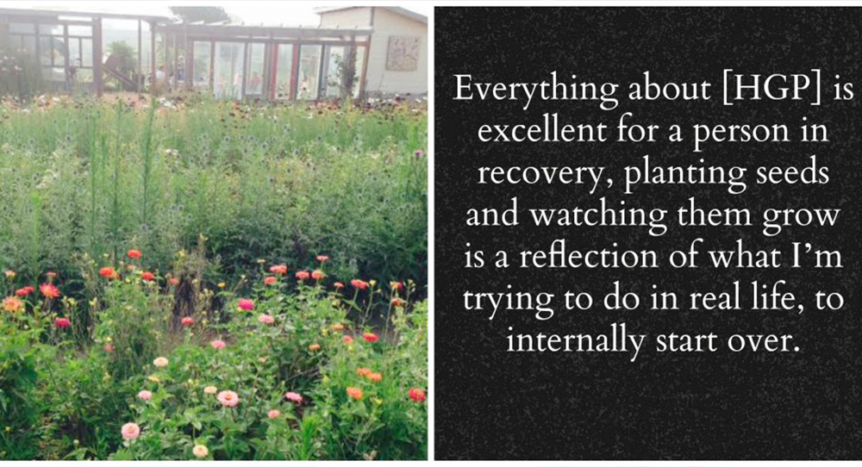 On May 27, 2016, I was released from jail after a month of incarceration. I had only been in the car about two minutes when my case worker informed me that the Homeless Garden Project (HGP) was going to give jobs to the first 20 people that showed up to their main office; my first inclination was “too much, too fast.” After a little reflection, I went to the office, and was number 13 on the list. Looking back, I consider myself most fortunate indeed.

Getting sober was an intense uphill battle for both me and my court-appointed team. In September of 2015, I was put in Janus, and after a week, my withdrawals were so bad I was sent to ICU at Dominican, then returned to Janus to finish the 28-day program. I then went into an SLE (sober living environment) and started trying to unlearn all the habits I’d formed in the 8 years of my life as an adult.

Addiction was not a problem for me until I was 19, and in the Marine Corps. I was raised all over the world in a very conservative Catholic, military family, and I’m the oldest of 14 children. I joined the Marines at 17, and transitioned from a very sheltered life to a very liberal one; and girls, cigarettes and alcohol became more prevalent. After my tenure in the Marine Corps, I tried briefly to live life normally, paying rent and working, but didn’t enjoy the responsibility after being the oldest of so many children, and being a Marine, so I ran away from all responsibility and became homeless. It felt good.

After 5 years of traveling and drinking, and using all manner of substances, I found myself under a bridge with my girlfriend. We had just done our first shot of heroin and were drinking cheap vodka when there was a huge mental “click” for us. We realized we were going to die if we didn’t get help.

I’ve done all my recovery in Santa Cruz. Pure concentrated power of will is what’s needed for me, combined with threat of incarceration. I’ve done a lot of jail time in multiple counties and states, and it’s one of the few things that frightens me.

After 5 months at Janus’ SLE, I used again after getting stressed out by not being able to pay rent. I went to another program and then back into the same SLE. Then I used againwhen I couldn’t find work, and overdosed. I came to in the hospital, with my case worker telling me I had court the following day and I would be remanded.  By this time, the court had about enough of my behavior, and were about to just give me jail time (280 days), but I decided to go on Vivitrol, which is a monthly shot that makes it impossible to get high. In my opinion, it’s a miracle drug.

On one of my last days in jail, I was watching TV and got a sort of subliminal message. One of the characters on TV said, “We give you chances other people only dream of, and you throw them away.” That night, I prayed God would give me the miracle that recovery people talk about as soon as I got out of jail. And the day I got out, my case worker brought me to HGP.

Homeless Garden Project is the embodiment of everything I need in a job right now.Everything about it is excellent for a person in recovery, planting seeds and watching them grow is a reflection of what I’m trying to do in real life, to internally start over. When I bike to the farm, I take a wonderful ride down West Cliff, and then show up to work at the place that’s the first job I’ve ever had I don’t hate after two or three weeks. It’s a great place to bond with people from all walks of life, and I’m sure it is an amazing place for people to better understand and humanize homeless people, and to erase classism on all sides of society.

To homeless trainees and housed trainees like myself, HGP is a unique opportunity to try something new and better ourselves. I knew next to nothing about farming or gardening before I started working here, and I learn more every day. I’m very grateful to have this program in my life and if every county had a program like it, it would destigmatize homelessness statewide, maybe then, the nation. The farm as a whole is a perfect marriage of freedom and structure, and is one of the best things in my life today.

–Shannon McGurk is a trainee at Homeless Garden Project.

Note: Shannon participated in a two-week trial hire at HGP eight weeks before he wrote this. We worked with 13 people for two weeks alongside our regular crew, and were able to hire 5 into our training program, including Shannon; others were placed on a waiting list. This process informs our planning to scale up to serving 34 people each year, and eventually 50 people.