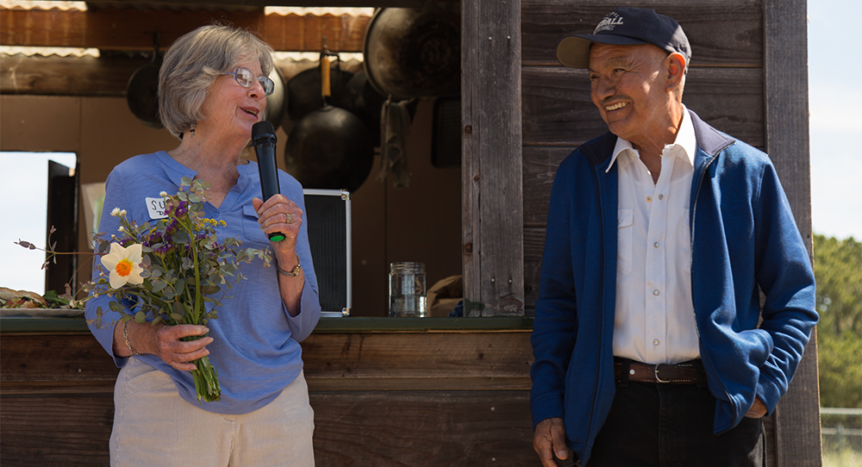 Cesar Chavez Day, March 28, 2015. We celebrated with a community work day in partnership with UCSC Alumni, attended by more than 100 people. After lunch, we heard from Ines Marines and Susan Samuels Drake about their experiences working with Cesar Chavez. Below is the text from their talk.

My name is Ines Marines. I was born in Eagle Pass, Texas, in 1931. It was during the depression and times were very tough. My father had a ranch and taught my brothers and me the value of hard work and how to work the land. We grew our own crops to feed ourselves and also to sell. I dropped out of school when I was in 5th grade, so I could help on the ranch.

During the 1950’s, while still in Texas I read an article in the newspaper about a man named Cesar Chavez. He left an impression on me because he spoke about the mistreatment and rights for the farmworkers. At that point, I had never heard or read about anyone trying to help the farmworkers. I thought to myself, “This is my man!”

In 1961 I moved with my family to California. Some of my brothers and sisters had moved to the Los Angeles area and found industrial work. I decided to come up north to Watsonville, where my aunt and uncle lived. I really liked this area because of all the agriculture work that was available. I quickly got a job working as a farmworker for various farms. I decided to settle in Watsonville.

Even though I liked working out in the open fields doing farm labor, I did not like the poor working conditions. The hours were very long. We worked from sunrise to dusk. The wages were very low and without any benefits or overtime pay. There was no place where a worker could go to complain about a dispute. Farm owners also hired supervisors that would intimidate, threaten or fire workers if they complained.

In the newspaper I read that Cesar Chavez was coming to the Salinas Valley, to help the farmworkers there. A group of five of us got together and decided to ask Cesar Chavez if he would also be willing to help improve our working conditions. We contacted the United Farm Worker’s Union in Salinas. They set up a meeting for us and we went to meet with Cesar Chavez. Cesar Chavez heard all our complaints and when we asked him if he would also be willing to come to Watsonville, to help us, he replied that he could not do it for us, BUT that he would teach us how we could help ourselves, if we were willing to learn. We said, “YES!”

Our group of five would meet with volunteers from the UFW on Thursday evenings after work. We were taught about our working rights, how to file complaints and how to peacefully organize and inform other farmworkers about their rights without the fear of being fired. Among some of the volunteers who helped us were Roberto DeLaCruz and Shelly D’Amour. Many of the volunteers were students from various Universities throughout the country.

During this time, the late 1960’s and early 70’s, we held many boycotts and strikes of local farms and we were able to successfully win many contracts. I was appointed to be a representative for the UFW and taught how to implement insurance contracts and learned the policies and procedures of the contract with West Coast Farms, where I worked. If a farmworker needed to file a complaint or had questions, I would help them. Cesar Chavez was a very smart man because he taught us how we could help ourselves. He made us believe in ourselves and through education he gave us confidence and the tools we needed to successfully win contracts that improved our working conditions and lives. We now had better wages with benefits, health insurance for our families and ourselves and pension plans.Up to this day, I still collect my retirement benefits with the UFW plan.

Today I continue to be involved with the UFW in Salinas. I attend the annual conventions, various rallies and help with campaigns that benefit the farmworkers. I am a lifetime honorary member of the UFW. I will forever be grateful to Cesar Chavez for everything he did to improve the living standards for the farmworkers.

I feel it is important to continue to stay active and volunteer to help with projects that will teach others to help themselves. Like here at the Homeless Garden Project, people will learn how to grow their own healthy food while bringing the community together.

I met Cesar in 1962, when he was so shy he barely spoke at a weekend meeting of what was then called the California Migrant Ministry. Over the next 20-some years, I saw him evolve into an engaging, powerful speaker who could hold crowds of hundreds captive and motivate them to support the goals he had for an association of farm workers seeking justice in the fields, vineyards and orchards of California.

When you met Cesar, he looked you in the eyes—something in these times I miss—and stuck out his hand or, if you knew him, opened his arms wide for an abrazo, a hug. He remembered not only your name, but your spouse’s name and often your children’s names and something about them. Not only did we work 12- to 14-hour days, but sometimes we had dinners and dances, especially at weddings, together. He loved to jitterbug and would dance with a 70-year-old or a 3-year-old with equal comfort.

Cesar was early-on into growing and eating organic produce. Before it was a fad to oppose pesticide and herbicide applications, he had a book prepared to educate consumers on the threats to our food supply.

He was also ahead of the ecumenical movement. Our worship services incorporated Catholic priests, Protestant ministers, and when available Jewish rabbis. He worked with Arab farm workers, African-Americans, Native Americans, Filipino-Americans—I sensed he had a healthy curiosity about people with cultural experiences different from his own. He often took someone with a personal problem into his office to hear their story and find professional for the workers—he didn’t only listen with compassion.

His gift became his downfall. He loved learning about accounting and printing presses, business management styles, you name it—he read constantly at night after he’d worn out the rest of us. But he had to have his finger in so many pies—finally had to pry him away from signing every check, every thank-you letter. He lost his focus on his greatest talent: organizing farm workers.

I see this with elected officials, too. We campaign and elect them, elevate them because of their talents. Then most of us go back to our lives and expect our Board of Supervisors, congress members, our presidents to do all the hard work. At someone’s memorial, we often promise to carry out their goals—and forget to do that shortly afterward.

If Cesar were here today, he would be pulling weeds, asking if you’re taking care of that

sore on your arm, chatting with your children. He would be especially pleased that this is an organic garden gift to our community.

Many of you know that the phrase used in Obama’s campaign Si, se puede came from the farm workers’ movement—Cesar gets credit for it, but the United Farm Workers co-founder Dolores Huerta started it, I’m told. May this garden and all who work here thrive. Si se puede—yes, it can be done.

In San Diego, former farm workers movement staff operates service clubs to teach students of all ages how to implement these ten values that Cesar Chavez held.  These traits he learned partly from his mother, who though poor always had food and time for some homeless person passing through their town. He also was a devout Roman Catholic who believed in the basic teachings of Jesus.