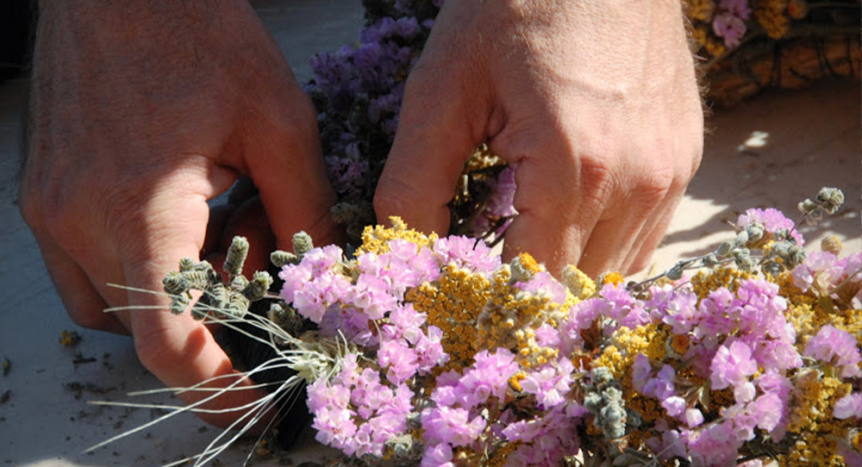 My name is Magalí Morales and I have had a really great time volunteering in HGP’s social work program. One of the many reasons why I love this agency is that it’s a place for positive change and empowerment from the grassroots.

There is nothing better than teaching someone who’s been hungry how to grow food.  And the truth is that it pertains to all of us to work toward food safety.  In the same way, I believe we all need to learn to heal ourselves and each other emotionally, and I wanted to have a conversation with HGP staff and trainees to better understand what they are already doing to that effect, and to add more tools to their toolkit.

Most people don`t know this, but there is a quiet revolution happening in the field of mental health, based on everything we have learned about how psychological trauma operates and how to heal from it.  It began in the 1980s, when professionals realized that survivors of child abuse and domestic violence had the same symptoms as veterans of the Vietnam and other wars.  Thus the term Posttraumatic Stress Disorder was coined, and a new way of thinking began.

In the words of Sandra Bloom, author of Creating Sanctuary: Toward the Evolution of Sane Societies, a way to describe this shift is that, instead of asking an afflicted person “What is wrong with you?,” we ask, “What happened to you?”  Which is to say, we need to start thinking about people who are emotionally injured, rather than mentally ill.  In fact, one of the things Sandra Bloom discovered when she was running an inpatient psychiatric unit in Philadelphia in the 1980’s and 90’s, was that 100% of her unit’s patients had significant histories of trauma, regardless of their diagnosis.

We define psychological trauma as the reactions to an event or events that are terrifying and life-threatening, and which overwhelm our ability to cope.  Survivors of trauma are not only individuals who have been to war, or who have survived the “war” of abuse and domestic violence at home, they include people who have been exposed to community violence, certain kinds of crimes and accidents, and also people who are worn out from the constant aggressions of racism, sexism, class discrimination, homophobia, and all the other oppressions around which our society is sadly organized.

With her Sanctuary Model, Sandra Bloom and her colleagues created a very simple acronym that functions as a guide to healing:  SELF.  Trauma survivors experience a lot of fear and anxiety, and feel like the traumatic event is happening over and over again because they experience flashbacks and nightmares which reenact what happened. The first step toward healing will be a return to Safety.  Not only physical safety, but emotional safety. This is one of the most healing aspects, I think, of the Homeless Garden Project mission, where people work as a team, and there is a culture of mutual respect and kindness, as well as support for resolving conflicts.

Trauma survivors also experience other overwhelming feelings, including sadness and anger, because they have sustained serious losses and injustice.  Since survivors are in emotional pain and they want to avoid remembering what happened—which is hard to do because of the flashbacks and nightmares—numbing is also common.  Another step toward healing, then, is to learn to manage overwhelming Emotions.  There are many ways to do this, and the HGP trainees gave abundant examples, but a common theme was gardening.  All activities associated with gardening—interacting with the soil, water and plants, being outdoors, doing physical work and using our hands—are soothing.  They return us to our bodies and allow us to reduce the intensity of negative emotions.

Once we learn to manage the intensity of our emotions, we need to do one more thing, and that is to grieve our Losses.  Every survivor of trauma has lost something.  And without knowing details, we can assume that every person who has experienced homelessness has had significant losses too:  a sense of being safe and cared for in the world, the human right to having basic needs met, a sense of belonging and kinship, and more.

We can look to our indigenous ancestors for guidance about how to grieve.  In my work leading trauma healing groups for the past ten years, we perform a very simple healing ceremony, that includes giving thanks for the good that we have, letting go of old feelings and things that no longer serve us, inviting new feelings and experiences into our lives, and creating positive intentions for all of humanity and our planet.  For each of these acts we perform an action, for example, lighting sage leaves with the flame of a candle as we let go of old things, or placing seeds in the earth as we express our positive intentions.

When facilitating this conversation at the Homeless Garden Project, I took a chance and created a little altar, with four ‘stations’ where each person could perform one of these actions in the privacy of silence.  We didn`t have much time, but I asked those who wanted to participate to concentrate on just one thing, and allow themselves to experience the process.  The result was wonderful!  Most people joined in, and they made insightful comments, saying they felt more peaceful, and light-hearted; sharing they felt very safe; and expressing that it was powerful to actually take physical actions rather than just talk or have inner dialogue.

The fourth step in this non-linear model of healing, is to recover our enthusiasm for the Future.  Survivors of trauma tend to feel like their life has never been the same after the emotional injuries.  They miss their old selves and wish they could recover their joy and positive expectations, but don`t know how.  Grieving our losses allows the wounds to heal, to hurt less and less each time, until our metaphorical ‘scar tissue’ is stronger than who we were before and there is no more pain.

Along this journey, one day we wake up and are surprised to feel excited, to look forward to the next chapter of our lives, and that is a surefire sign of healing.  Furthermore, we discover that we have more energy and want to contribute to the healing of others and building a world where nobody is homeless and nobody has to heal alone.  And that is what we have been doing at the HGP.

Magalí Morales is an Associate Social Worker, originally from Mexico, who recently moved to Santa Cruz and is passionate about creating social justice and holistic healing.  She has worked with survivors of trauma, including people who have experienced child abuse, sexual and domestic violence, and political torture, for 14 years, and helped found the Trauma Healing Project in Eugene, Oregon.  She can be reached at magali@crystaldharma.com.