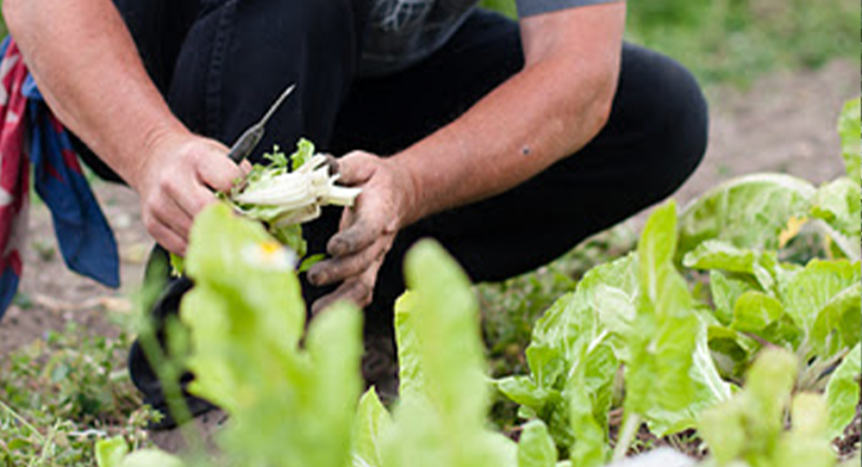 As HGP gears up for a screening of A Place at the Table, we want to give you some background information on the Community Food Security movement and its origins.

Andy Fisher created and publicized the concept of community food security and played a key role in building the community food movement. From 1994 to 2011, he led the Community Food Security Coalition (CFSC), a national alliance of groups working on access to local food. Below, is a very small excerpt from his essay in the companion book to A Place at the Table.

“…Hunger is the result of both a failure of the political will to resolve an entrenched problem and a failure of the marketplace to meet the needs of the poor. Why can’t we donate our way out of hunger? Forty-nine million people are at risk of hunger, based on the fact that they qualify for food stamps. The charitable food sector would have to increase in size more than sixfold to even feed all of these persons for a week every month. Second, even if we could manage this feat, the impacts on society and individuals are less than desirable. Charity, subject to the continued interest and ability of donors, is inherently unsustainable…

Going back twenty years or so, the unsustainability of the emergency food system was front and center in the minds of a small cadre of anti-hunger dissidents working on food and nutrition projects in low-income neighborhoods across the country. As a graduate student in urban planning at UCLA, I was part of a team that completed a comprehensive study of the food situation in inner-city Los Angeles in 1993. My colleagues and I saw that the food banks’ “medical model” of solving hunger through providing doses of food, as if hunger were a disease carried by an individual, was a humane but inadequate way to address a more systematic problem. We believed that hunger could be prevented from happening in the first place by taking a public health approach that included public education, policy advocacy, and the other interventions that addressed the root causes of hunger and poverty.

We saw plenty of problems in the way food was produced and retailed: too few sources ofhealthy and affordable food in low-income neighborhoods; small farmers going out of business because they couldn’t get a fair price for their crops; subdivisions replacing food as the primary “crop” on some of the nation’s best farmland; rampant pollution from overuse of agrichemicals; and increasing concentration of the ownership of the nation’s food supply into the hands of a few massive multinational companies. As a result, consumers were getting further and further alienated from the source of their food. Diet-related diseases among persons of color were on the rise, and they were higher than rates for whites. At the same time, we also saw potential of alternative food production and distribution projects as tools for widespread social change. We knew that urban farming could increase access to healthy food and provide economic opportunity.

Using the framework of a food system–the set of activities that lead to the production of food, its distribution, its consumption, and the handling of waste–we soon realized that the same food system that harmed low-income consumers also marginalized family farmers. We developed a conceptual framework that we called “community food security,” which held that the transformation of the food system through reorienting food production and distribution around the needs and assets of communities and family members was a pathway to creating a healthier, more ecological, and more democratic society….

Although community food projects often seek to improve the nutritional status of low-income households, they are not anti-hunger projects. They aim to improve the food security of their participants, but within a broader context of transforming an inequitable and unsustainable food system. They typically engage individuals at a more intensive level than food pantries, but the number of people they reach is much smaller.

CFPs cannot solve the massive and entrenched problem of hunger in the United States. They can, however, provide a glimpse of a very different approach to the same problem…

This new framework should focus on the root causes of hunger, such as ending poverty, and on health, since hunger and obesity are flip sides of the same malnutrition coin. Like the community food projects, the new framework must also embrace innovation and transformation at the community level.

–Find Andy Fisher’s entire essay, Getting Off the Anti-Hunger Treadmill in http://www.takepart.com/place-at-the-table/book