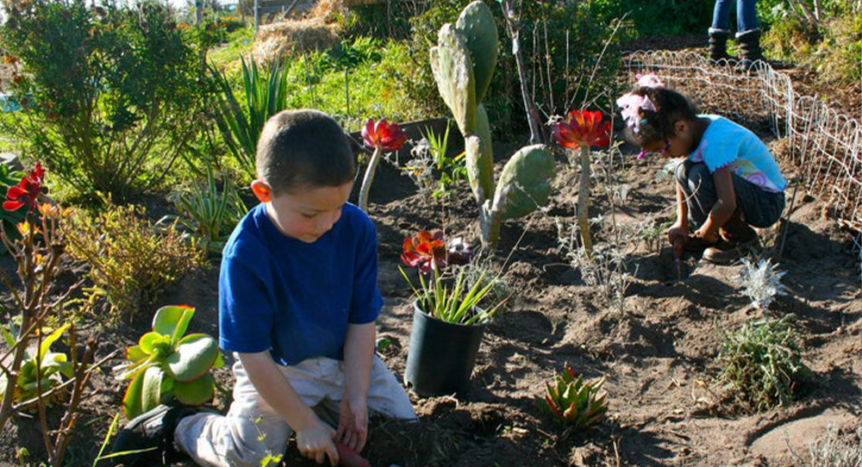 Martin Luther King Jr. Day at the Homeless Garden Project has been a designated volunteer day for a long time now. This year saw at least 60 helping hands, and many of them were families with children.

“It’s a real treat when we get kids out here, because usually kids are in school during our weekly volunteer hours,” said Kelly Mercer, Volunteer Coordinator at the Homeless Garden Project. “It’s really great to see the kids start to understand where their food comes from, they see it come from the ground and not from the supermarket. It’s amazing seeing them make that connection.”

About 20 volunteers from Americorps also helped out on the farm, in a day which focused on composting, and clearing beds of weeds.

“We got a lot of work done,” Mercer said.

Adreanna Riley of Aptos brought her two kids, ages 7 and 18 months, to help on the farm for the first time.

“He helps with gardening at home so we thought this was a good service project,” Riley said.

Riley’s son, Gabriel Margolise, told Patch how he had just learned about Cesar Chavez in school the week before.

“When he was a kid he did work in the fields too,” said Margolise, as he helped his mom extract a huge weed from the blackberry patch.

Don Lessard explained that they were cleaning out poison hemlock, mallow, and calendula, common weeds which tend to take over the blackberries if you let them. Although the main crop of blackberries ripens in mid summer, a few of the berries were turning black already—prime food for the birds right now.

“In this climate a lot of plants are fooled in this weather because there really isn’t a winter-summer distinction, except for the hours of daylight,” Lessard said of the unusually warm and sunny December and early January occurring in Santa Cruz this year.

Starting February 2, every Thursday and Friday from 10 a.m. – 2 p.m. will be volunteer hours. If it’s your first time, make sure to show up at 10 a.m. to get a tour of the farm. Stay as long as you’d like! The farm is located on Shaffer Rad, between Delaware Avenue and Highway 1. Google map address is 0 Shaffer Road.