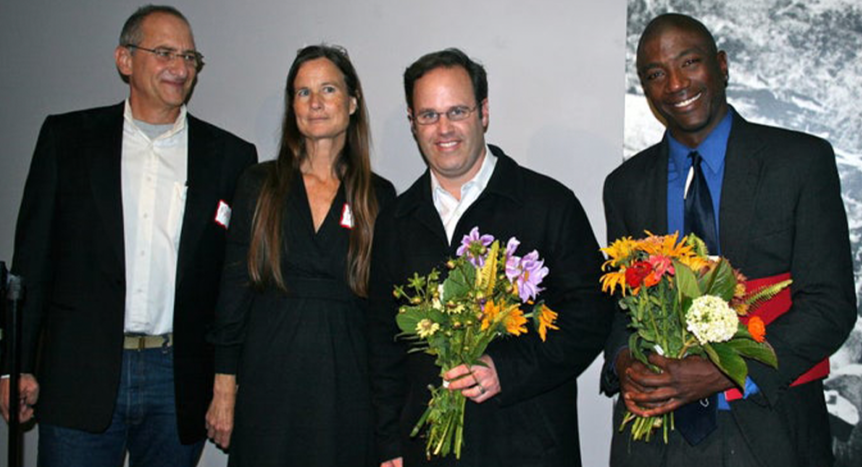 Behind each wreath that hangs at the Homeless Garden Project’s retail store, there is a story.

When Robert Cochran, 38, arrived in Santa Cruz two years ago, he brought nothing with him but the clothes on his back and the resolution to turn his life around. He had decided to come to Santa Cruz on a whim, tired of his old lifestyle in San Francisco where he said things had taken a turn for the worse.

“Depression kicked in, followed by self pity and loathing. Alcohol became more of a necessity. One day I woke up in a strange place, I didn’t remember how I got there. I had twenty dollars in my pocket. I took the twenty bucks and went straight to the Greyhound, and told the driver take me as far as I can go with $20. …and so I ended up in Santa Cruz,” Cochran told Patch.

Cochran slept in campsites and shelters, and subsisted on very little. One day, he stumbled upon a booth for the Homeless Garden Project at Project Homeless Connect, a one-day convention that takes place at the Civic Auditorium, and he decided to apply for a job. In retrospect, it was the best decision he ever made.

“They put me to work before I was even hired,” a smiling Cochran told a packed room at the Museum of Art and History on Friday evening.

Cochran never guessed where that first day of laying grass over flower beds would lead him.

“I became an organic farmer. I learned how to plant, maintain and harvest my own food. Two years ago, I didn’t know anything about farming,” he said.

In his two years as a trainee, Cochran also learned how to write his resume and interview for jobs, and he says he should have employment within a couple weeks to a month—not in organic farming; in retail, or maybe even radio, though the skills he learned at the HGP farm are with him for life.

Aside from it’s organic vegetables, fruit, flowers, and herbs, the Homeless Garden Project has been cultivating something else for it’s trainees since it began twenty years ago: Self-esteem, self-suffiency, and self-confidence—all easily lost when a person becomes homeless.

“When we’re working together there’s this sense of learning to work as a team, but it’s also identifying what your skills are and being able to create things that are part of the farm and learning to use your creativity, even if you go out into the world and find a job. It creates a sense of better self-esteem, a sense of accomplishment,” said Tamara Cucchiara, manager of the Womens Organic Flower Enterprise (WOFE) at the farm, and the Homeless Garden Project’s retail store.

WOFE was created fifteen years ago, a place for women to come together and feel safe while learning how to dry the organic flowers they grow on the farm, and create beautiful-smelling, long-lasting wreaths and other crafts from them. Men are now integrated into the program too, but Cucchiara says the program still provides the same things: a home away from being homeless, a sense of stability, learning a skill, and a sense of belonging to a community.

“It’s the only job I’ve ever had where I actually really look forward to going to work. We have a long weekend, and by Tuesday I’m always so excited to be back there,” said Joan Coleman, a trainee who recently drove her RV from Seattle to move to Santa Cruz.

“Every lunch was like this comraderie between friends and family. We actually gave a care about each other,” said Cochran.

Although Cochran has one more year left at the HGP, he looks forward to spending more time in his new job, and leaving his space for a new trainee to fill.

“I can’t wait for that person to witness this progressive jounrey the garden has given me. People ask me if the garden got me back on my feet to which I reply— I am not back on my feet. I am flying high right now and the sky is my limit,” Cochran said.

Cochran received a standing ovation from the audience, many of whom appeared to be deeply moved by his forthcoming story of self-transformation.

“The Homeless Garden Project is a perfect example of why I love this community so deeply, why I have tremendous hope for Santa Cruz, and why I believe Santa Cruz is a model for the rest of the world,” said Coonerty.

A candle-lit trail led the way from the back of the MAH’s free First Friday to the Homeless Garden Project’s Holiday Store, hands down the sweetest-smelling store on Pacific Avenue. It’s brimming with hand-made flower and succulent wreaths, beeswax candles, teas, confections, mosaics and much, much more. All of the crafts are created by volunteers and trainees like Robert Cochran of the Homeless Garden Project, and proceeds benefit the program.