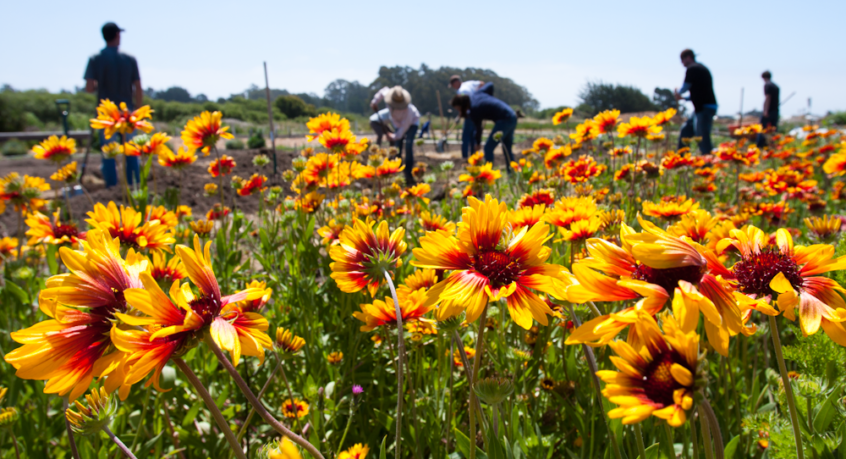 When Lauri Girard first came to the Homeless Garden Project five months ago, she had already made tremendous strides in her recovery. To fully appreciate the impact the Project has had on her, one needs to know where she has been, what brought her here and what is in store for her next.

“It’s a miracle I’m alive, and so grateful to have another chance.”

Lauri began using drugs and alcohol in her teens; as it progressed to abuse, it started to show in negative ways including loss of relationships, jobs and self-esteem.  “My bottom came when I ended up homeless on the streets of Reno contracting a serious infection and still I couldn’t stop. As an educated professional, this wasn’t supposed to happen to me!”

It took an intervention by friends and family to bring her to a medical detox, where the healing began.  Treatment centers, family, friends and her church were support for her, but “I had to want it for myself.  I cried out to God for help and He answered.” Lauri came home to Santa Cruz and entered the New Life Center, a 6-month residential program. New Life required participants to obtain employment; this was difficult for Lauri because of her lack of strong work history.  She found a seasonal job, but was soon without work again.

While attending Project Homeless Connect, she visited the Homeless Garden Project table.  Greeted with enthusiasm, she was encouraged to complete an application. Lauri loves flowers and gardening and thought it sounded like something she’d enjoy doing. “I had no idea of the full impact it would have on my life.”  She was called in for an interview; there she found out more about how the Project works.  “I was sure I wouldn’t be hired because I planned to go to summer school and because I had begun living in a clean and sober house. Little did I know at the time that the Project is about helping people like me to start or to continue a productive path.”

Lauri is now a trainee at the Homeless Garden Project, working four days a week, learning every aspect of working on a small organic farm. This is a paid position which can last up to three years and is not seasonal.  During the winter months, the trainees work in the shop mankind dried flower wreaths and other gift products for HGP’s Holiday Store.  Lauri says, “There are so many benefits to working at the farm, but one of the most gratifying is getting a paycheck, paying my rent and finally being a productive member of society.”  While farm operations are important, the human component is the focus of the Project. Because the person comes first, once a week there is a circle meeting where trainees and staff have an opportunity to check in on a personal level. The staff is genuinely interested in how trainees are doing and what staff can do to help; all trainees are assessed in depth for individual needs and matched up with community resources.

While it is surely Lauri’s strength and determination that have brought her to this place in her recovery, she believes that the Project has made a dramatic contribution to her success and her outlook about the future. “The garden is amazing, there’s so much love out here. For me spiritually it’s about the healing power of preparing the soil, sowing the seeds, planting, watching them grow and then harvesting the crops.  I spend time praying in the garden, lots of talk with God, while having a huge respect for creation.”

Although Lauri is one that doesn’t plan on a future in agriculture, she feels the education can also be used on a personal level.  “I’m learning so much on the farm; one of my favorite days out here is Wednesday, when we have a class in the morning. The classes are anywhere from pest control, composting to cooking with organic farm ingredients. I don’t know too many people who have watched their boss, who is also a professional chef, gather produce, and prepare it in a wok outdoors on a farm with an ocean view. Trust me, I had to pinch myself to see if it was real. I am truly blessed! Lauri will be celebrating 18 months of sobriety, has a new grandson, is enrolled at Cabrillo College and plans a future in the medical field where she can give back all that she has been given.

On top of her gratitude list, she says, is all those people that have supported the Homeless Garden Project in any way. “You are so awesome!”